40 years and counting for our Basingstoke General Manager

Joe Izzo first stepped through the door of our Basingstoke plant as a young man looking for his next job opportunity, after picking and packing with Snap on Tools, and never looked back. He took the afternoon off work to go for an interview with Sketchley for a stockroom assistant role, they spotted his talent, and the rest is history.

Forty years later, a lot has happened and there have been many changes, but Joe is still working for Johnsons Workwear in Basingstoke, but now in a somewhat more senior position as General Manager.

When Joe talks about his time and Johnsons Workwear, his job and his colleagues, there is nothing other than joy in his tone and laughter at his memories. His time in the stockroom was to be short-lived as, after just six months, he was promoted to Supervisor, then Unit Manager and Production Manager at the age of 21. He worked in that role for around three years and then applied for and was appointed to the position of Works Manager (now known as General Manager). At the age of 24, he was the youngest Operational Manager in the company and when Sketchley became owned by Johnsons, he took over the management of Service too. He comments jokingly: “I looked around in a meeting of the General Managers the other day, and now I’m the oldest one in the room!”

One of the biggest changes Joe has seen since he started working in the laundry industry is the change in technology. Our barcode system for tracking every garment was revolutionary at the time and a huge step forward for the industry, and there has been huge growth in the company through acquisition. And there’s no hesitation when Joe is asked what he’s enjoyed most over the years: “The people – without question… We keep people here, and we’ve got so many long-serving people who give us such loyal service. Many people in Basingstoke have worked here for over 20 years. Their commitment and dedication makes my job so much easier. I have a management team with a collective experience of 160 years, and they are the best team I could ever have wished for.”

An added bonus for Joe was meeting his wife Trudy who also works for Johnsons Workwear in Basingstoke. When the business was with Sketchley, Trudy was a National Account Manager, she was transferred to Basingstoke to work as a Service Manager, and is now employed as a Customer Service Manager. Joe comments: “Trudy’s the best thing that’s happened to me. We have been together for over 20 years and married for 15 years now. We have six kids, the youngest 25, the eldest 34, and five grandchildren.”

Joe is looking forward to many good times ahead with Johnsons Workwear: “I’m proud and happy to be here. The 40 years have gone in a flash and I still feel young, although I don’t look it! I believe that we’re in very exciting times as a company. We’re in a very strong position and getting stronger with new team members with different skill sets joining all the time to bring a new, dynamic element to the group.” 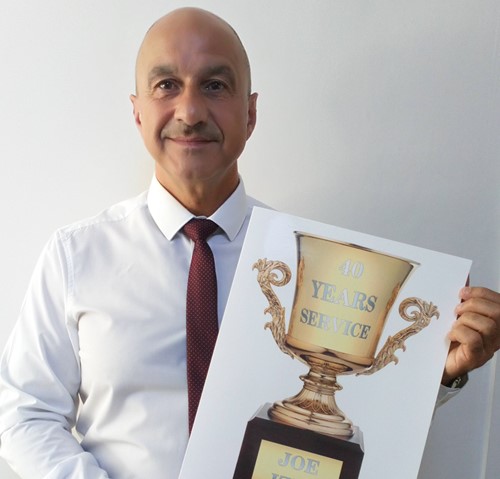