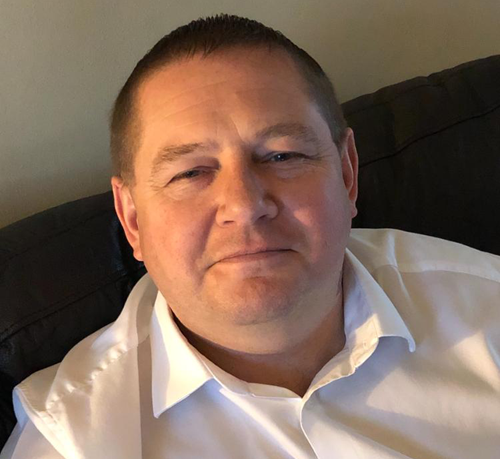 For International men's day, we wanted to shine a light on some of the amazing men that work for Johnsons Workwear and find out a little more about them.

This year we would like to talk more about men’s mental health and encourage the men in our lives to #talkmore.

Let’s hear from Richard Sturnham, who is a Regional Sales Manager at Johnsons Workwear:

Talk us through an average day in your life:

I would generally start with an hour or more travel time in the car (Thinking time for the challenges ahead) on route to either a visit with one of the team or to a plant. Complete emails and Various tasks first including Sense checking working practices and K’P’I’s. Then supporting on appointments through the day, then reviewing that person’s performance at the end of meetings to try and give some constructive feedback. Nowadays if I’m in the office for any period of time add in two or three Teams meetings in to the mix like everyone else. Travel back home and chill out until night time walkies with Ozzi our new family lockdown pooch. (Eat, Sleep, Repeat)

What did you want to be when you were younger?

I had a dream for a good while that I could become a pro snooker player. After a promising spell of winning a couple of trophies at the local club this dream was kicked in to touch when I was beaten convincingly in a tournament by a 10 year old lol (I was 15) Just slightly underestimated the standard in the “real” world!!

What do you think are some of the biggest challenges facing young boys and men today?

The same old story I guess of not wanting to show weakness by admitting that your head/brain can be ill just the same as the rest of you. Also, that sometimes you have to admit that you can’t do everything, and you need to ask for help. Things are definitely moving in the right direction though the more exposure this type of subject its given.

How do you look after your mental health?

I am no fitness guru as those of you that know me will testify 😊, but as a hobby I follow a number of motorcycle race series and get to as many meetings as I can across the country. That allows me to switch off from any day to day stresses. Exercise for me is simply walking Ozzi and chucking a ball for him down the park which he will do until he nearly passes out. That’s again my other wind down thinking time. Then of course the weather gets better and Its BBQ time which is one of my favourite relaxations. I get to spend real quality time with the family in the garden pretending I’m on holiday with no work on Monday. I would do this every day if I could get away with it, but I usually get out voted after three days running.

What advice would you give your younger self?

Spend more time learning so you don’t have to play catch up later on in life!!! Spend less time worrying about things you can’t do anything about. Keep a good work life balance and “always” make enough time for the people you care about the most.

What changes would you like to see in the future for men and their mental health?

I think that things are going in the right direction with high profile people talking about their mental health and when things aren’t going well in their minds. There are even Bike racers now that you would imagine can’t perform in that dangerous arena with mental health problems, that admit having a tough time just like the rest of us (Or most of us at one time or another) unless you are very lucky. So more of the same really in the future rather than big changes.

Who is your biggest male inspiration in life?

A little cliché but my dad. He brought my sister and I up on his own through our adolescence after he split with my mum. He also held down a high-pressure/stress job at the same time. He was either extremely good at handling stress or very good at hiding it from us based on what we are referring to with Mental Health today!! Either way, a real top man. If my kids think of me in that way in 30 years’ time I will be a happy man regardless of anything else I have!!

What is your proudest achievement?

The birth of my daughters Abi and Lottie have to be the best and proudest days as I would expect from all Dads out there. As a work achievement, Driving in to Hinckley plant in my “Down your way” van on 11th October 2002 and driving out and turning up at home in my first company car (British Racing Green Ford Focus GL51 ULO I think from memory) and giving my old car which was a right pile of junk to the security guard for free just to get rid of it - a very proud day too!!